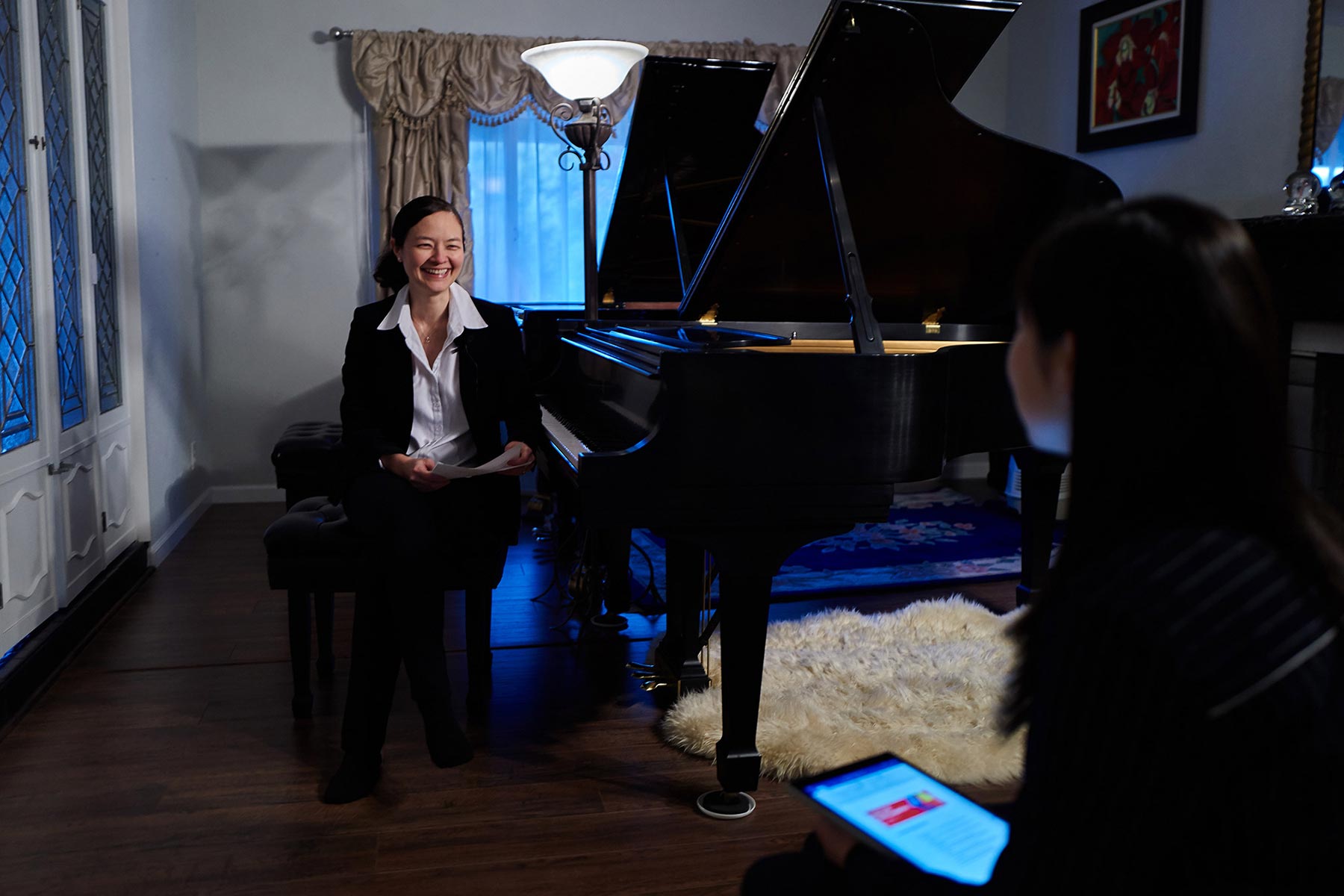 SF Asian Youth Talent Competition interviews judge Sandra Wright Shen.  Find out what she thinks about the American Fine Arts Festival (AFAF) Carnegie Hall performance opportunity.
On Friday, December 4th, we sat down with judge Sandra Wright Shen to ask her a few questions about herself and the upcoming Asian Youth Talent Competition. Sandra Shen is a concert pianist who comes from both American and Asian cultures. She is half Chinese and half American and grew up in Taiwan where she attended a music school. Sandra grew up playing piano from the age of four and also knows how to play exotic instruments such as the Guzheng. Sandra has attained recognition and awards from piano competitions all over the world and her music invokes emotions from the hearts of many.

“When I was a young student, my teacher would remind me how composer Rubinstein said that before you walk off the stage in a competition, you already received the prize because all the hard work that you put in during the preparation is your best reward. If you happen to be the first prize winner, always remember that it doesn’t change you. You are still the same person as before you got the first prize, and it is important to know that music is a lifelong journey and we continue on this quest and adventure. We want to provide the opportunity for students to work toward a goal and for them to display their talent and share with what they have to say to us.”

Can you tell us about the American Fine Arts Festival? And why should students participate in the competition to take advantage of this opportunity?

“Sure, the American Fine Arts Festival is a festival where talented musicians all over the country are invited through auditions to perform in a concert at Carnegie Weill Recital Hall.”

“It is like… for perhaps basketball players to play at the Warriors stadium. You get to experience the most professional setting. It’s not easy to find a hall where you have perfect acoustics and a great piano. At Carnegie Hall, you have everything in the most professional setting, and you get to really experience what music teachers are talking about — how the notes travel to the very end and you have to play for the very last row in the audience. You get to enjoy the timing, the space, and how you create the sound. I think that it is a valuable experience, and if people know that they may perform at Carnegie Hall, then they will practice differently. It will be a great motivation for young musicians, and they can enjoy a trip to New York as well.”

What was your journey to becoming a renowned concert pianist?

“I started piano when I was four, went through musical training in music school, and then I went to the summer festival. One of the shocking moments of that trip was I played in a Master class and the Master, instead of praising me, drew a big X across my score and threw it on the floor in front of everybody. I felt so ashamed and he said to me, ‘Being a musician is not to show off your talent. You are a musical servant, you are to do everything you can, and be very faithful to the music, to whatever the composer has written down’. And that, really changed my life, and now I’m on the path, growing and working hard, to be as faithful as I can to deliver the music.”

What was the turning point in the beginning of your career?

“When I was fourteen, I got to participate in a summer festival in Germany. At that moment, I was very sure that I wanted to be a musician, but I wasn’t sure why. After the performance, it was a late Beethoven string quartet, and after the concert, I found myself in tears. It was as if someone elderly who had been through a lot in life turned around, telling me ‘don’t be afraid, keep going, keep going’. At that moment, I realized that although music is not like medicine, music has the power to speak to our hearts without using words. You can bring such encouragement, healing, and inspiration through music. I think that’s how I found the meaning in wanting to being a musician.”

As a judge, what are you looking for the most in a contestant?

“You know, it’s like walking into a movie theater. I don’t know what I’m looking for, but I want to be touched, I want to be surprised. So I would say surprise me, move my heart, and show me what you want to say, speak to me.”

Why is music essential for younger students?

“Music puts us in touch with our emotions and our inner being. It wakens our sensitivities within and, for children, many times if the funding is not enough then schools cut out the arts and music, which takes away the ability for students to express themselves. You can’t really express yourself through math or feel touched or beautiful from math. So I think it is very important and of course, through learning to play an instrument, one gets to expand their character, discipline, and endurance and coordinate between the emotional and the logical parts of a person. So, being an instrumentalist, I’m constantly gauging myself between the two and I think it is a tremendous privilege for anyone who gets to play an instrument.”

As a judge, what are you looking for the most in a contestant?

“You know, it’s like walking into a movie theater. I don’t know what I’m looking for, but I want to be touched, I want to be surprised. So I would say surprise me, move my heart, and show me what you want to say, speak to me.”

“So I’ll close with this. Great Rachmaninoff once said, ‘Music is enough for a lifetime, but a lifetime is not enough for music’.”

SF Asian Youth Talent Competition is pleased to announce a collaboration with American Fine Arts Festival. Selected winners will be invited to participate in the Grand Prix performance at Carnegie Hall.

Since its inception in 2003, the AFAF has been organizing annual music festivals and performance competition events, providing hundreds of music students each year an opportunity to perform in a formal concert setting at some of the best concert halls in New York City, including Weill Recital Hall at Carnegie Hall and Merkin Hall at Kaufman Center. The AFAF has been conducting regular auditions in the following states: New York, New Jersey, Massachusetts, California, Connecticut and in Washington DC. In 2010 and 2011, auditions were also held in Beijing, China.

In the ten years since the organization’s founding, the AFAF has played host to many guest performers from abroad and expects to continue developing ties with educational organizations throughout the Americas, Europe, and Asia. In addition to its regular festival program, the AFAF runs the Summer Courses in Europe program, which had its successful debut four years ago, an international piano competition– the New York Grand Prix which was introduced in 2008, as well as an international competition for young vocalists – Golden Voices of America which premiered three years ago. A parallel competition for string players, the AFAF Golden Strings of America, made its debut in 2010.

The AFAF hopes to continue to provide a rich educational environment for young people across the country, encouraging them to realize their musical and personal potential.


Deprecated: WP_Query was called with an argument that is deprecated since version 3.1.0! caller_get_posts is deprecated. Use ignore_sticky_posts instead. in /home/sfyoutht/public_html/wp-includes/functions.php on line 5063